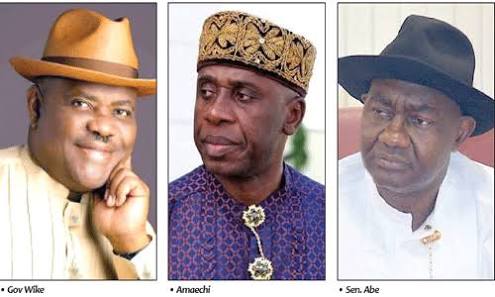 …Grand target is to humiliate Amaechi, Giadom out of APC

… Describes Etta as a stooge of perceived overlords

… Appeals to conflict-mongers to allow Ajimobi recover in peace, leave him out of party crisis

Chieftain of the All Progressives Congress and erstwhile National Publicity Secretary of the defunct New People’s Democratic Party, (nPDP), Chief Eze Chukwuemeka Eze, has raised the alarm over plots to hand over the Rivers State Chapter of the All Progressives Congress to Gov. Nyesom Wike and the People’s Democratic Party – PDP by some elites of APC

Chief Eze said the plot is the brainchild of the same emperor who pushed Adams Oshiomhole to his Waterloo and is targeted at embarrassing the erstwhile Governor of Rivers State, Nigeria’s Transportation Minister and Director General of the Common Sense Revolution, Rt. Hon. Chibuike Rotimi Amaechi, as well as the Ag. National Chairman of the APC, Chief Victor Giadom.

The party chieftain said the emperor who feels threatened by the internationally acclaimed and towering political profile and public acceptance of Amaechi as a better, egalitarian and visionary leader from the South, is hell-bent at destroying and selling off the Rivers APC to the opposition People’s Democratic Party, in order to smear the character and personality of Amaechi and bring it to naught.

He said the scheme has already reached an advanced stage and that plans have been concluded to deceitfully to mislead the Court with cocktail of lies in a bid to obtain legal backing to lace their satanic artifice with a sort of cosmetic legitimacy.

The PDP stooges who are laying claim to the leadership of the party have already taken counsel and have concluded arrangements to submit another Gov. Wike’s ally, Barr. Worgu Boms, as a replacement for Giadom in an attempt to rubbish the Constitution of APC.

The party stalwart frowned over comments credited to the self-acclaimed Ag. National Chairman of the ruling All Progressives Congress, Ntufam Hilliard Etta, that big APC masquerades are playing drums for Chief Victor Giadom and that the Rivers-born highest ranking officer of the party from the South-South, has long ceased to be a member of the National Working Committee of the APC haven resigned his position to run for the office of Rivers Deputy Governor in 2019.

Etta was also quoted as saying that Giadom is dictated by some unnamed powerful persons in the party, who have chosen to cause avoidable crisis so as to destroy the party for their selfish interests.

Dismissing Hilliard Etta’s claims, Eze said Chief Victor Giadom never resigned his position as a member of the National Working Committee of the APC but only applied for waiver pursuant to Article 31 of the Constitution of the APC to co-run with Tonye Cole as Rivers Deputy Governor in the 2019 guber poll. The said waiver was unanimously granted by NWC and conveyed in a letter signed by the then National Chairman, Comr. Adams Aliyu Oshiomole, on September 14, 2018.

Eze further clarified that after the party was refused participation in the said elections following series of stumbling blocks mounted by the Emperor in collaboration with PDP Agents and forces of darkness and a host of allies, Chief Giadom was directed to resume office in a letter dated May 24, 2019, and signed by the party’s Director of Administration, Abdullahi Yusuf Gashu’a, this time as Ag. National Secretary to fill the vacancy created by the exit of the former occupant of the office who was also granted waiver to contest for the governorship of his state and emerged victorious.

The party Chief said all papers touching on the waiver including its approval and the subsequent letter of resumption are in public glare, conspicuously displayed for the perusal of the reading public.

In a statement made available to media houses, the party chief described Etta as a mere political jobber and avowed mediocre who is only working hard to play the spoilers script and massage the vainglory of his overlords and financiers who may have promised to decorate him with a new rank in their circus of satanic collaborators.

He said the Order obtained from a Port Harcourt High Court restraining Chief Giadom from performing his functions as Ag. National Chairman of the APC was given in error, stressing that the Court was misled by a league of political desperados who have resolved to taint the image of the Nigerian Judiciary in furtherance of their inordinate and self-serving ambitions.

Eze challenged Hilliard Etta and his paymasters to produce a certified true copy of the resignation letter tendered by Chief Giadom to strengthen their claim, assuring that their surreptitious and illicit artifice will definitely meet its waterloo.

Chief Eze further appealed to Judicial Officers to be weary of being inveigled into a situation in which they find themselves becoming partisan agents of political desperados and wrongdoers in the pursuit of their selfish private vendettas, noting that such is capable of defeating the very essence of justice which is the constant preoccupation of Courts.

The party stalwart called on Hilliard Etta to be courageous enough to name the powerful masquerades in the All Progressives Congress who are bankrolling and playing drums for Chief Giadom or remain silent in his voyage of cowardice.

He further cautioned Etta and his overlords of the underground political gamblers to desist from dragging Sen. Abiola Ajimobi into their unwholesome gambling and called on Nigerians to continue in prayers for the quick recovery of the former Ondo Governor, who has been battling with ill health.

Eze reassured Nigerians that the devious plot to sell off the Rivers APC to the PDP will surely collapse and that the continued plot by the emperor who feels that APC is an extension of his political empire where he solely determines who takes what, is living in the past as stakeholders are set to restructure the APC to the democratic and progressive path.

The party chief appealed to politicians to display some level of decency and integrity in their approach to political aspirations and always strive to leave good legacies for posterity, opining that employing deceits and calumny to achieve an end is unholy and will only aggravate circumstances of unblessed memories hereafter.

He expressed confidence that the current political fireworks and floodgate of litigations that has overwhelmed the party will definitely fizzle out when stakeholders learn to place collective interest beyond personal ambitions.

On the purported lifting of suspension of Adams Oshiomhole by some roadside traders parading themselves as the executives of the APC in Ward 10, Etsako West local government of Edo State would only be useful in the Supreme Court if Adams ever goes there. Eze asserted that Adams is finished politically so far the politics of APC is concerned.