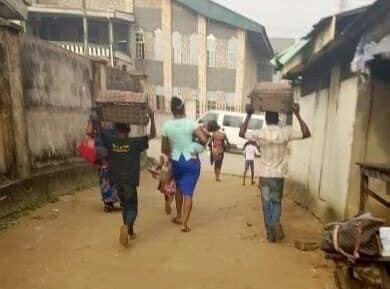 … General Commander of Vigilante in Rivers vows, to track down members of Cult gang. Declares no retreat, no surrender

Residents of Rumuodogo 1 and Rumuji Communities in Emohua local government area of Rivers State are fleeing their homes as a group dreaded cult group that killed three operatives of Odegu Security and Advisory Planning Committee, OSPAC, a local vigilance group have allegedly killed about 10 selected family members of OSPAC. Members of OSPAC vigilante group that has been providing security in their area.

Gunmen believed to be members of a secret cult had early Monday morning killed three of its members and came back and again killed at least six members of the families on Tuesday night of January 7.

The Ogba-Egbema-Ndoni Peace Advisory Committee, OSPAC, General Commander of OSPAC, in the State, Goodluck Okoro, who oversees other branches of OSPAC in the state has vowed to track the Vigilante group, has declared, ‘no retreat, no surrender’ as they will hunt down the criminal cultic members.

Okoro stated that members of OSPAC vigilante cannot be intimidated and called on the Rivers State government to assist security agencies because criminals in the State are not ready to surrender, repent and embrace peace.

“We are surprised that people are not tired of committing crimes. That automatically means that these bad boys are not relenting. We are not going to be intimidated. We will continue to carry war to them whether within or outside state. My advice to the criminals is that they cannot win the war. They can run but they cannot hide. They should make hay while the sun shines.”

According to reports, the bandits killed the three security men in the early hours of Monday at Rumuodogo 1 community.

It was also gathered that a motorcycle rider which conveyed the murdered vigilance group members to the area was also killed.

Various sources from community told our correspondent that the murdered vigilance group members had in recent times led the onslaught against bandits terrorising communities in the area.

They were said to have gone to Rumuodogo 1, in search of a dreaded cult leader earlier declared wanted for failing to accept peace and denounce cultism before they were killed early Monday morning.

One of our sources who prefers to remain anonymous said, “The incident happened this early morning. The OSPAC people got information that a high profile cultist who was among the cultists they declared wanted had returned. They were on their way coming when the cults gathered and killed them.

“The OSPAC people who brought relative peace had called on all cultists to repent and stop their activities. They asked the repentant cultists to take oath that they will not be involved in criminal activities. Some of the cultists accepted, while other refused and ran away.

At the time of filing this report, the Police Public Relations Officer, DSP Nnamdi Omoni has not issued any official statement on the latest development in Rumuodogo.

It would be noted that since the establishment of OSPAC vigilance group, many cultists have been decimated, therefore, creating relative peace in most communities in the area and making it possible for motorists to resume plying the Choba-Emohua-Rumuji-Ndele axis of the East-West road.