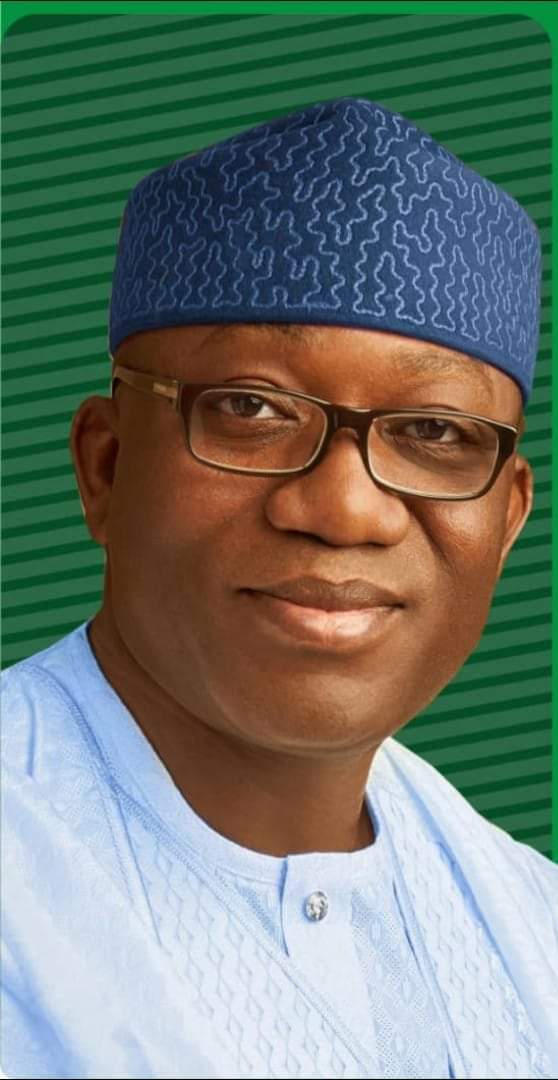 “To live is to serve” -Lewis Howes

As the Governor of Ekiti State and Chairman of Nigeria Governors’ Forum, Dr. Kayode Fayemi CON, marks his 55th Birthday on Sunday 9 February, it is important to felicitate with him and to wish him longevity and ascendance to greater heights.

Fifty-five is an angel number and it is a sign that major life changes are coming. As a master number, 55 is the number of independence, freedom, and self-determination. Fayemi himself knows what transformation he is expecting the age to throw on his laps as against those identified. Even in the midst of cutting the cake and clinking of glasses, the attention of the “Birthday Boy” will focus on the greater responsibility, which life and circumstances have donned on him like a big cloth.

Fayemi is not a stranger to any form of political struggle. Struggle, generally, is his life and success his constant goal. After stints in academia and activism, Fayemi espouses progressive and modern politicking. He is also well-liked on all sides of the political divide. He is today the poster boy of inclusive democracy in Nigeria.

Fayemi has been living the life of struggle and service since his young adult days. He has lectured in Africa, Europe, the Americas and Asia. He has also served as an adviser on transitional justice, regional integration, constitutionalism, security sector reform and civil-military relations issues to various governments, inter-governmental institutions and development agencies. He was the main technical adviser to Nigeria’s Human Rights Violations Investigation Commission (Oputa Panel), which investigated past abuses and currently serves on the Presidential Implementation Committees on Security Sector Reform, NEPAD and the Millennium Development Goals.

In the sub-region, Fayemi was technical expert to the Economic Community of West African States (ECOWAS) on small arms and light weapons and United Nations Economic Commission of Africa on governance issues. He is also a member, Africa Policy Advisory Panel of the British Government. At other times he has served as a consultant to the OECD on Security Sector Reform and chaired the Commonwealth Human Rights Initiative’s Committee of Experts on developing guiding principles and mechanisms of constitution making in Commonwealth Africa

When it was the least convenient for him, Fayemi threw himself into the ring to fight for the entrenchment of democratic tendencies across Africa. As a young adult, he protested apartheid in South Africa, fought against the military junta in his home country, Nigeria and pitched his tent with the progressives to berth a new democratic dispensation. He is currently serving as a second-term governor of Ekiti State, chairman of the governors’ forum, first to have emerged from the South West region and a strong pillar of progressive politics in Nigeria.

For Fayemi therefore, service to others is a strong ingredient of success. He has imbibed the belief of Mahatma Gandhi that the best way to find yourself is to lose yourself in the service of others. But this does not mean that he has won all the battles that have confronted him in his political journey. Currently, the Yoruba, the land of his birth, is in a conundrum, and beckons at the 55-year-old Fayemi as a strong political leader whose strategy is required for the restoration of the race.

Of all the regions that make up Nigeria, the South West, mainly occupied by the Yoruba, presents the country with unique political and social quandary. The race is expected to become the economic showpiece and powerhouse, but it is currently facing a socio-political crisis of historic proportion. Its political relevance, which was always relied on in the democratic journey of the country, is on trial. The general consensus is that the leaders of thought in Yorubaland would need to cultivate a Fayemi-like leadership style in their discussion about resolving their present conundrum.

At 55, posterity beckons on Fayemi to put his political dexterity to use in salvaging the Yoruba race from quandary. In this age of unprecedented complexity, this can be very challenging, but Fayemi is already well tested and trusted for the challenge. He is a transformational leader who tends to lead by example and who tends to get the best out all circumstances with relative ease. He uses rapport, inspiration and empathy to engage followers. He earns trust from every stakeholder in the Nigerian project, and from all sides. This makes it easy for him to influence people positively.

It is in this season of anomie that Fayemi must throw himself into the fray. The more challenging the situation, the higher the stakes, and the more imperative it is that a leader behaves in a trustworthy manner. Even as he takes a hard-nosed, clear-eyed approach to tackling the people’s problem, Fayemi cannot afford to tread the popular path. He must consciously and conscientiously present himself as a stalwart source of reliability and strength that is lacking elsewhere. The people are looking for someone who will not sit on the fence when the chips are down. They want a leader who will choose to take responsibility, own the issue, hold himself and others accountable, make a plan to fix it, execute the plan, and move on. Yet such a leader must be ready for brickbats, as his intentions will surely be misread.

Fayemi is tough-minded on issues and standards, but tender-hearted with people. He is a leader who owns and addresses issues. He is a bridge-builder who looks outward for solutions instead of retreating inward into isolation. Rather than finding ways to avoid, delay or minimize tough situations, Fayemi would proactively lean on to it. He would rather speak the truth than parry it. Instead of deflecting, he would choose to take responsibility for fixing a problem and wrestle it to the ground. He doesn’t spread blame, He owns and addresses it.

With this kind of Fayemi leadership style, there is optimism and possibility for a positive solution to the Yoruba leadership conundrum in the near future. The kind of leadership needed by the race is not dominance but bridge-building and consensus. There must be frank, awkward and, sometimes uncomfortable conversation among the people. They must try to recognise that they need to throw up a leader, who appreciates the fact that the other groups are as nervous about having sincere discussion about collective responsibility as they also are.

It is only by giving a transformational leader like Fayemi a chance to play a prime role, that the race can ward off its ill effects, stereotypes and assumptions. Otherwise, ungrounded fears, and racial anxieties will linger into the future. This is the role Fayemi must be willing to play as he marks his 55 years birthday. This is his birthday challenge.

Segun Dipe is the SSA to Gov. Fayemi on Public Communications.