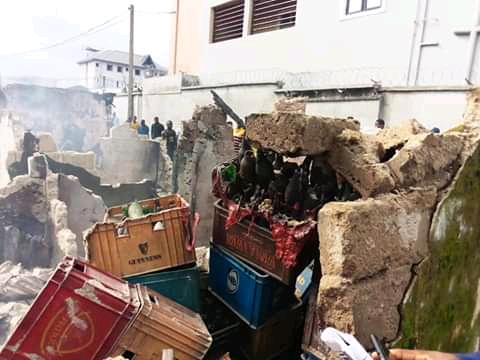 The Proprietor of the hotel said to be Prince Ihunwo, a popular activist and environmentalist in Rivers State, who escaped unhurt is traumatic as he watched his hotel in ruins.

The fire which was said to start from the restaurant amongst the shops inside the hotel building destroyed every thing inside the building, all the 20 rooms was razed down but no casualty was recorded.

This is the remains of 20 rooms Pedro Hotel razed down by fire in Mile 2 Diobu, Port Harcourt.

The Brothel is housing Commercial sex workers and some shops, including a restaurant, where the said fire emanated from while the restaurant owner, was cooking before the unfortunate incident occurred.

Eye witness said Efforts to reach the state fire service proved abortive as their numbers rang out, and the community resorted to self help.

Other buildings sitting tightly with the hotel was however spared as the inferno did not spread to adjoining buildings.

Eyewitnesses said attempts to contact the State Fire Service when the inferno was raging were fruitless. Fortunately, no life was lost.

Okowa pays tribute to Dein of Agbor at 43, ascended youngest monarch in Africa