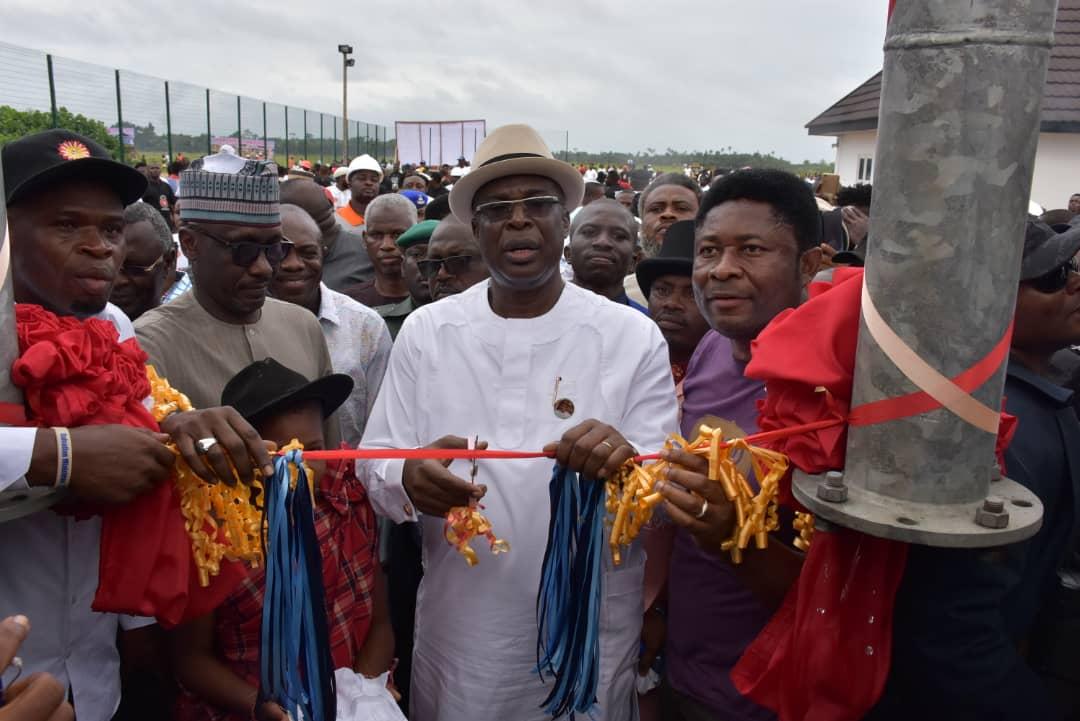 Buhari assures that Kula kingdom will be used as showpiece oil host in development, employment–Timipre Sylva

Agitating host Communities that shutdown and occupied of Oil Mining Lease,(OML-25) in Kula kingdom of Akuku-Toru local government area of Rivers State since August 2017, have been assured by Federal Government that reasons for their anger have been answered if only they could guarantee peaceful environment for resumption of oil production on the Belema Oil flow station.

The Minister of State for Petroleum, Timipre Sylva who delivered the message from President Muhammadu Buhari while officially reopening of OML-25 in Belema in presence of Representatives of the host Communities, Group Managing Director of NNPC, Mele Kyari, MD of Shell, Founder/President of Belemaoil Producing Limited, Jack-rich Tein Jr., and others at the reopening of Belema Flow Station in Kula said Kula kingdom will be a showpiece for other peaceful host Communities to emulate.

The Minister has assured that because President Buhari decided to work the talk, he directed that the highest level of representation of federal government agencies, the President of Senate, Army, Navy, Airforce, DSS, Police, NSCDC and Petroleum Minister, GMD NNPC, MD of Shell were in Kula during the reopening.

“I must tell you that this is history, at no time in the history of Nigeria, such an array of high level delegation visited a community, related to oil industry.

“We have just come here to tell you that you are not alone, the Federal Government is with you, the President t is with you, and I want members of the community and Belemaoil to know that we are with you and will support you every step of the way.

“We want to assure you that our relationship with the communities have come to stay. I want to appeal to you that with the unity in Ijaw land today, we have fought to this point, at least the Federal Government have started to look to our way, it is time for us to change strategy and bring in the benefits of investments to our communities.”

He advised host Communities to sustain the peace brokered between them and Shell Petroleum Development Company (SPDC) by the Federal Government.

On his part, as the Founder/President of leading indigenous oil company, Belemaoil Producing Limited, Engr. Jack-rich Tein Jr,  said the cries of the OML 25 host communities have been heard by President Muhammadu Buhari as massive development like no other will be seen in no other oil bearing Communities in the Niger Delta.

Tein Jr, lauded the Minister of State for Petroleum Resources and the NNPC Group Managing Director, for their commitment towards the restoration of peace to the host communities and the reopening of the Belema Flow Station.

“Shell came here with the most powerful personnel, the Deputy Managing Director and you can see the technical team led by the Technical Director. This is super excellent visit to this great community.

“The community is happy; you can see the youths all over the place jubilating. You heard what the NNPC GMD said, that if the community fails to develop, he is going to hold Jack-rich, his younger brother responsible and that the community should also hold him, the GMD responsible.

“There is an important thing we need to recognise that Nigeria has a growing population of about 3% to 5% and that in the next 30 years, we are going to experience a population growth of about 380 million and 65% to 75% of that population are young guys like you.

“We are going to have additional 180 million people in our population in the next 30 years and if we don’t handle it well, we are going to have a lot of social issues. That is if we fail to set up a platform that is going to allow business thrive in this part of the country, then we will have a major challenge.

“That is why the GMD and the Minister took it as an important part of their business to come here with all the Federal Government agencies, to actually demonstrate that we recognise what you have been looking for. We recognise your struggle, we understood what you meant and we are coming to visit you.”

Also speaking in an interview, Group Managing Director of NNPC, Mele Kyari declared that priority of the corporation is not just to resume oil production in OML 25, but to ensure that peace returns to the host communities because once there is peaceful environment, oil production can start and host Communities will be the best for it.

Kyari stated that having successfully brokered peace between the parties, the NNPC will be involved more in community engagement.

He said: “First of all, there was absolute breakdown of law and order in this community as a result of which we had to shut down the Belema Flow Station for over two years leading to loss of over 35,000 barrels of oil per day and the peace of the community.

“In monetary terms, that is worth about $1.7 Billion, which would have given food to the youths and provide benefits to the community and the nation.

“What we have done is to engage the community, the leadership of the community to ensure that the dispute between them and Shell is brought to a closure. As a result of the push, there will be more community engagement. They have agreed to vacate the facility and allow operations to continue in the flow station.

“Our immediate priority is the peace of the community, not oil production. But we know that ultimately, when there is peace, oil production will come back and we will be sure of the lifting of 35,000 barrels of oil per day.

“A re-entry process will commence and we will validate the damages that have been done to this facility overtime. I am sure within a short period of time, Shell will come out with a plan of coming up.”

Meanwhile, Kula kingdom was akin to a carnival as different dance groups adorned in different attires danced round Kula singing songs of praises to God for their collective victory against what was said were years of oppression.

Recall could be made that the host Communities of OML-25 made up of Offoin-ama, Belema and Ngeje had in August 2019 in the midst of crisis with Shell over marginalization shutdown the flow station and occupied it.