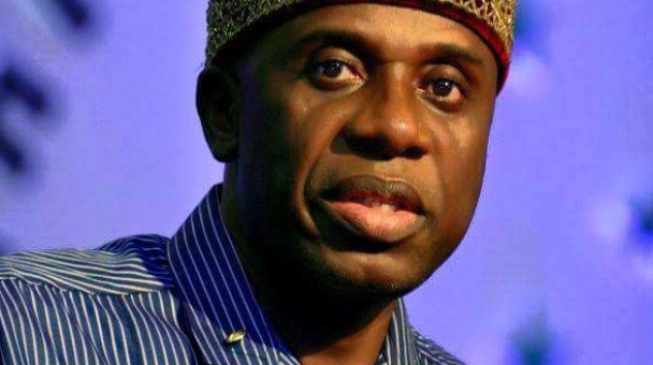 The political intrigues playing out over the control of the soul of Rivers state chapter of All Progressives Congress -APC is rearing its ugly again since the botched 2019 supreme Court of Nigeria derailing of the Ward congresses in the state. Information reaching this medium has it that the leader of APC in the state and Minister for Transportation Rt.Hon. Chibuike Rotimi Amaechi has been fingered in the sack of Mrs. Chinwe Igo Aguma, the wife of Igo Aguma, the former Acting Caretaker Committee Chairman of Rivers state All Progressives Congress-APC, this is coming as the right of reply to alleged claims of APC Caretaker Committee Chairman by one Isaac which states thus.

“One new year packaged lies from one Isaac claiming to be APC caretaker chairman against Mrs. Igo Aguma. In the said concoction he alleged that Gov Wike is set to reward Mrs. Igo Aguma with a permanent secretary appointment for the roles her husband played against Mr. Rotimi Amaechi. Let me congratulate Mrs. Igo Aguma in advance believing that truly Gov Wike will make her permanent secretary. Hon Igo Aguma was with the minister of transportation Mr. Rotimi Amaechi all through the 2019 elections. President Muhammadu Buhari recorded some thousands votes in Port Harcourt LGA of Igo Aguma in the 2019 Election against the zero vote in Ikwerre LGA of Mr. Rotimi Amaechi. Igo Aguma who asked the minister to seek for peaceful APC and that became his undoing. The first victim of that boldness of chief Aguma to his friend was his wife who the former Director General of NIMASA Dakuku Peterside wrote for her immediate recalling from her London based office to Nigeria within hours that was politics taking too far for us men involving our wives in our political differences. Power will certainly leave us one day.”

For a top APC chieftain in Rivers state Eze Chukwuemeka Eze, has called for Governor Buni led National Caretaker Executive to do away with Senator Magnus Abe and Igo Aguma, an action that had never been backed up with cogent and verifiable reasons of indictment of any charge from any court of competent jurisdiction as belonging to any association is fundamental right of citizens as enshrined in Nigerian Constitution section 40. The Supreme Court of Nigeria at several judgments had affirmed this via Ibrahim Umar and 22 others case the same goes for Dele Moses and 9 others that you cannot deny a citizen his right to belong to any association or political party of his choice and of people of like minds where his interest will be protected. This is the law of which Igo Aguma and Senator Magnus Abe are pursuing with backed legal pronouncement from apex courts in Nigeria.

WHAT ALBERT K.HORSFALL REVEALED ABOUT UNDERDEVELOPMENT OF NIGER DELTA REGION BY THE PRESIDENCY & MAFIA

Wike says his govt. has silenced APC with execution of projects