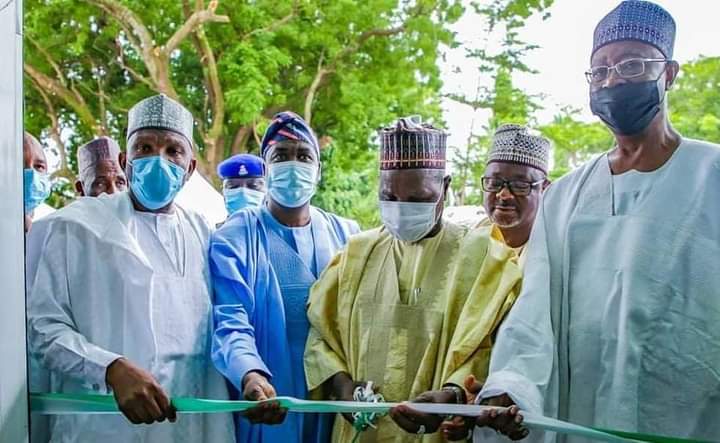 The governors spoke at the inauguration of the upgraded Arewa House Library.

Sanwo-Olu, who was represented by Deputy Governor Obafemi Hamzat, said the Arewa House Library has served and fulfilled the purpose of its establishment by sustaining its enviable status as a reliable centre for research and documentation.
The governor added that it was heart-warming that the centre has not only provided documentation of the history and culture of the people, it has also provided abundant materials and resources on contemporary studies on policy, peace and leadership. This, he said, has served as a rich reference point and source for scholars.
“I am glad that a centre as this exists in Northern Nigeria and in Nigeria at large to document historical occurrences that both we in this present time and even the future generations can learn from to either avoid repeating certain mistakes or to provide us with the knowledge to act better in future,” the governor said.

Sanwo-Olu said with the upgrade, the centre was now well placed to meet the need of 21st-century researchers.

He commended the centre’s Director-General, Dr. Shuaibu Shehu Aliyu, management and staff of the Arewa House Library for preserving the history and culture of the country through the preservation of research and historical documentation.
Masari lauded the APC national leader for coming to the aid of the centre, a role which, according to him, should have been played by the governors in the North.

He said: “It is an obligation for the governors in the North to give minimum support to the Arewa House as they all have the means and capacity to do so. The citizens of the North must also collectively work together in addressing security challenges rather than allowing government alone to do so.’’

El-Rufai, who was represented by his Commissioner of Education, Dr. Shehu Mohammed Makarfi, praised Tinubu for upgrading the centre and called on other philanthropists in the country to contribute to the growth of the research centre.

The Vice-Chancellor, Ahmadu Bello University, Zaria, Professor Kabiru Bala, also commended Tinubu for not reneging on his pledge to renovate and upgrade the library.
During the eleventh annual memorial lecture of the centre in March, Tinubu pledged to renovate the library to an international standard.
Tetfund Chairman Alhaji Kashim Ibrahim-Imam also praised Tinubu for the project.

He said: “ Arewa House is very important to every northerner. The man of the moment Asiwaju Bola Ahmed Tinubu, who took it upon himself to renovate the library, I know him as a friend, brother, comrade in the progressive struggles to ensure democracy in this country. I am happy he found it worthy to identify with us by contributing to the renovation of the library of the Area House.”

On The Visit To Ekiti