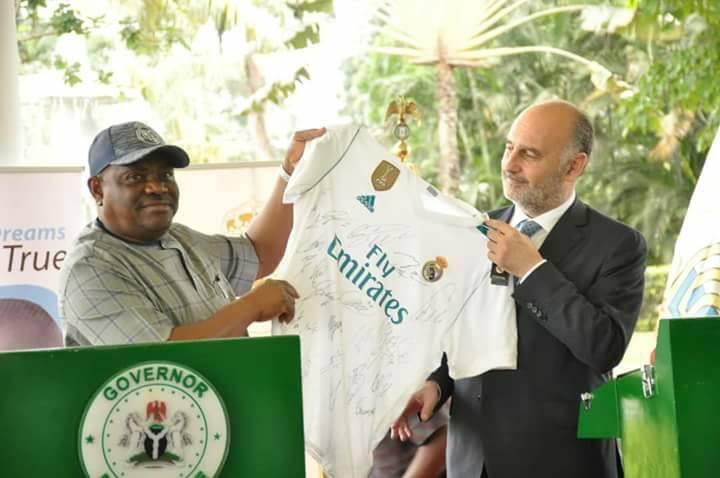 The official laying of foundation for the much talked about Real Madrid Football Club Academy took place on Monday 28th of May, 2018 as some officials of Real Madrid Football Club of Spain and Confederation of African Football (CAF) were at Port Harcourt as they took part in the groundbreaking ceremony. The initiator of the project Governor Nyesom Ezenwo Wike was all smiles as he used the opportunity to showcase the good hospitality with which Rivers people were known for again he made his critics to also swallow their negative comments which were uncomplimentary to the good intentions he has of using sports to build a veritable source of income for the teeming youth in the state.

Speaking after laying the Foundation of Real Madrid Football Academy Port Harcourt during ceremony the President of CAF, Ahmad Ahmad said the academy is not only for Port Harcourt or Nigeria, but for the entire continent. He admitted that the Real Madrid Football Academy when it commences operation will promote international football best practices in the continent as well as raise future stars that will make great input to the world football. Mr. Ahmad observed that the timing of the construction of the academy is a proof that it was ordained by God.

Initiator of the Real Madrid Football Academy and Rivers State Governor, Nyesom Ezenwo Wike who addressed international press conference during the foundation laying ceremony, said that the academy will help in building a new crop of International stars across the country. The elated Rivers state Governor said that the Real Madrid Football Academy will be open to all kids, but with special preference to Rivers Children, whose resources will fund the project.

According to him “When we initiated this laudable project, people doubted it, making difference cynical comments. However, today, this project has come to fruition. It will be a solid foundation for our children. We are proud to be associated with the best club in the world. Therefore, we will groom the best set of footballers. Sports is a catalyst for development.  What we are doing is for the interest of everybody.  To tell our footballers, we will do everything to support you”.

The project is billed to be completed in seven months and will be commissioned for use by members of the public. The children to be admitted into the school will be between 8 to 16years as announced by the Rivers state Governor.

While speaking during the event the President of International Sports Press Association, Mr. Gianni Merlo said Real Madrid being the best club in the world will develop a new set of stars from the Academy in Rivers State.  He admitted that “This is an important project for the whole world. It will mould international stars that will shape the game in the future”. President of Nigeria Football Federation, Amaju Pinick told the audience that with the Real Madrid Football Academy operational in Rivers state, there will be emergence of new generation of Footballers that will keep the nation’s flag flying in the international football arena. The groundbreaking ceremony attracted the dignitaries from within and outside Rivers state who also came to watch the Farewell International Friendly Football Match between Nigerian Super Eagles and their democratic Republic of  Congo Football team.

The Real Madrid Football Academy in Port Harcourt when in operation will contain a club house, classrooms, conference centre, training pitches and 1000 capacity spectator stand among other facilities as explained by Mr. Boma Iyaye.

Already there has been a General Manager of the Real Madrid Football Academy in Port Harcourt, who is Mr. Tareh el-Hajj who at the occasion said that the academy is in full swing as the management of Real Madrid in liaison with the Rivers State Government actually  set in motion modalities to ensure it succeeds without any hitches. Mr. el-Hajj said that coaches and medical staff for the academy will be accredited for the commencement of the process. The occasion saw the presence of other officials of Real Madrid who graced the occasion include: Inigo Arenillas, Manager, Real Madrid Foundation, Africa/Middle East and Oscar Diaz, Real Madrid Fund-Raising Officer. The former administration in Rivers state had chosen Etche Local Government Area as the permanent site for Football academy and a large expanse of land was said to have been acquired for such purpose. And there may be plans to also develop the Isaka Sports Village.