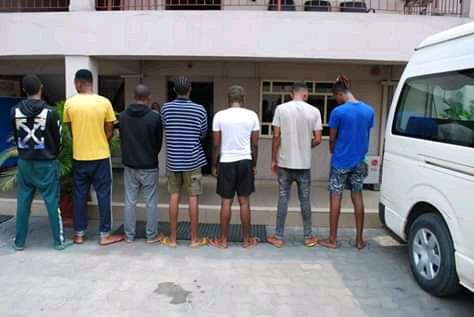 The trio of Kufre Miller Okoh, Joshua Tom and Emmanuel Ekpuk Anderson were picked up by operatives of the Commission on Tuesday, February 4 in an early morning raid on their hide out, No 52/53 Azungu Street, Rumuigbo, Port Harcourt, while the quartet of Pascal Alisiri, Chimeze Umungalaen, Clinton Alisiobi and Joshua Onuigbo were arrested at Intercontinental Hotel, Umuahia, Abia State on February 3, 2020.

Preliminary investigation indicate that the suspects, particularly those arrested in Port Harcourt were neck deep in bitcoin scam.

Justice for Ikokwu 5: Policeman who manhandled the late Chima Ikwunado’s genitals and Six other Police men identified, detained at SCID