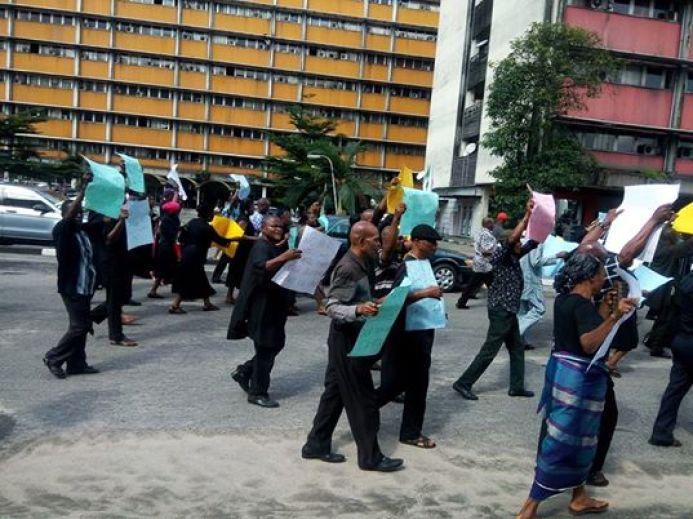 …State Govt. reacts to protest as unfair and ingratitude to its efforts to clear arrears inherited

Living up to their threat to embark on public protest over the non-payment of their retirement benefits after a Seven-day ultimatum to the Rivers State Government, hundreds of retirees yesterday, Wednesday November 6, staged a peaceful protest in Port Harcourt over their alleged neglect by the administration of Governor Nyesom Wike.

The protesters said they had become endangered species as many of their colleagues had died.

About a week ago, the retirees through their spokesman, Lucky Ati, had issued a one-week ultimatum to Wike to pay them their entitlements or they would embark on peaceful protest.

Yesterday, the protesters trooped out and converged on the state Secretariat, singing solidarity songs.

The retirees, who carried various placards, regretted that after serving the state they were abandoned and made to suffer unnecessarily.

The protesters said they could no longer cater for themselves, let alone their family members.

Their spokesman, Ati, said every effort to get their pension ended in futility.

He said the retirees decided to exercise patience after being assured that they would be paid.

Also, the leader of the 2012-2015 retirees, Monday Udoh, said that government owed them arrears that would lift them if paid.

He urged government to intervene urgently by paying them their gratuities and pension.

According to Udoh, many pensioners have died across the 23 local government areas in the state.

The Director General, Rivers State Pension, Ijeoma Samuel, told the retirees that government was aware of their plight and would address it.

Reacting to the protest, Simeon Nwakaudu, Special Assistant to Governor Wike in Electronic Media in a press statement made available to our Correspondent, recalled that in fulfillment of the pledge made by the Rivers State Governor, Nyesom Ezenwo Wike after he signed into law, the Rivers State Pension Reform Law (No 4 of 2019), the Rivers State Government has commenced the payment of pensioners under the Contributory Pension Scheme.

He said that the Head of Service of Rivers State, Mr. Rufus Godwins, had explained that more than 800 Pensioners under the scheme who have completed their bio-metrics have been paid.

According to him, the Rivers State Head of Service said that further bio-metric capture of other Pensioners under the scheme has been scheduled by the State Government in line with the directive of Governor Wike.

“We have placed over 800 of them on the payroll and we have started paying them. The window for bio-metric capture is open and we shall continue the process for the purpose of payment.

“Now that the process has started, none of those who fall into this category and the labour unions have gone out to talk about it on the radio, the way they did when the administration was working to address the challenge it inherited” he said.

He said by initiating the amendment of the State Pension Law, Governor Wike has set out to comprehensively tackle the challenges he inherited under the Contributory Pension Scheme from the immediate past Administration of the state.

Godwins recalled that other Pensioners who are not under the Contributory Pension Scheme have been receiving their monthly pensions since Governor Wike assumed office on May 29, 2015.

The Governor, he noted, also cleared the four months pension arrears he inherited from the Amaechi administration, before entrenching the regular payment of monthly pensions.

The state government alleged that the opposition in the state had misinformed members of the public regarding the true position of pensions ahead of general elections in March.  They created the wrong impression that all pensioners were being owed by the State Government, whilst those owed were under the defective contributory pension law operated by the immediate past APC Administration.

Explaining further, he said the Wike Administration had to follow due process to amend the law and create the platform for payment of those under the Contributory Pension Scheme.

Governor Wike said that the Rivers State Pension Reform Law (No 4 of 2019) will help in resolving the challenges generated by the Contributory Pension scheme.

He said that the State Government is committed to ensuring that civil servants and pensioners are catered for.