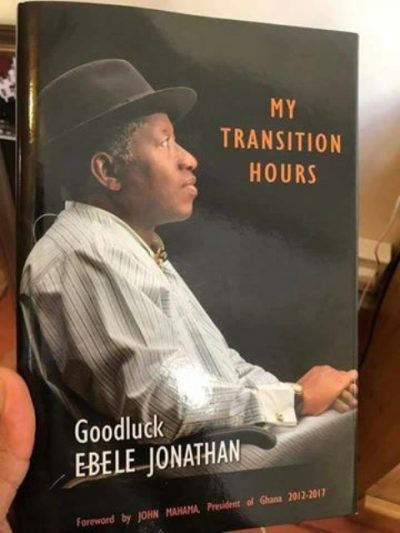 Nigerian leaders would routinely send themselves to the market to buy salt in a tray. They buy and balance the salt on their heads, then they pay rainmakers to ‘send down the rains.’ They get drenched, they lose all and weep home, blaming the heavens for lacking compassion.

There is a bird in Yorubaland which does that. Eluulu’s speciality is rainmaking but all the rains end up on its head – because it has no shelter to run to. Competing for Nigerians’ attention this past week were the Boko Haram atrocious mass killing of soldiers in the North-East and ex-president Goodluck Jonathan’s rave of the moment — his book: My Transition Hours. Between the free roam of terrorists in our North East and that book is the story of Nigeria’s self-murder, its voluntary transition from near sanity to physical and mental chaos.

I bought a copy of Jonathan’s book on Friday and quickly raced through the pages. From the Prologue on page one to the Epilogue on page 169, the book is a classic example of how to lead, lament, sulk and whine to failure. The ex-president passed the buck, blamed everyone far and near for his 2015 election loss and forgot to blame the real culprit. He could not see that the culprit is one lucky eagle called Goodluck Jonathan who plucked off his own lovely feathers mid-air.

The ‘transition hours’ of the ex-president did not start with his losing the March 2015 election. It started immediately after his election in 2011 when he ceded his powers to a coterie of strange spirits — men and women who flow with power and its honey. His transition started soon after he made new friends and created mortal foes of those who gave him shoes. Jonathan lost what Nigerians gave him the very moment he quaked and dropped his arms because his enemies complained that he was too hard on terrorists. Now, he is out, lamenting and blaming everyone except himself for his failure.

Just like Jonathan, a sad, bereaved Nigerian Army also saw profit in lamentation on Friday night. It released a tearful statement to a shocked, sleeping, mourning nation. It complained about social media’s frenzy about attacks on its gallant troops by Boko Haram terrorists. The anger in the statement was not directed at the terrorists, rather its complaints arrowed the “false figures” of casualties and the “inaccurate Boko Haram terrorists’ propaganda videos” already in public space. There was no ‘release’ in the statement for hope. Nigerians love and appreciate their military and their soldiers. The Nigerian military is, perhaps, the only reason Nigeria still stands. Left with politicians, they would have long ago done to the nation what the village madman did with his mother’s corpse — he barbecued it. So, when “untrained” terrorists mount video cameras, serially overrun impregnable bases of our gallant army and take out the valiant troops like “grasshoppers in the hands of wanton boys”, there must be questions. And Nigerians asked several whys. But there were no answers, even if incoherent, to the asked questions and to several others not yet asked. What came from the Army as the first official reaction to the tragedy was a statement that was not really a statement. It lamented, shed some tears for the dead but answered no question on why what happened had to happen to the lion of Africa. But then, if you ask the gods to kill that wife who cooked a tasteless soup, what would you do to the one who cooked nothing? You should not blame the army too much for saying almost too little on this national calamity. At least, it released a tepid, belated statement on the deadly attacks on its men and equipment. How many days did it take the Commander-in-Chief to remember to say something about his fallen men? Seven days! And what did he say really? Can you remember what he said?

In Jonathan’s book, I read flowing, leafy passages of presidential helplessness. He wrote about the 2015 elections and his being “from the wrong part of the country.” He wrote further about his being “an outsider that needed to be stopped at all costs.” Was this man so caged by his circumstances that he didn’t realize he was the Commander-in-Chief when he saw every hunter as a potent threat to his lion? Jonathan wrote about Adolf Hitler and Mahatma Ghandi. He said both were “intelligent, disciplined and passionate leaders” but one “destroyed himself and his country” while the other “built up his nation” and got it freedom. Very insightful you would say. Jonathan was very mindful of the verdict of history on his own “actions and inactions” as president of Nigeria. And so, he remembered that “unless the lion learns to write, the tale of the hunt will always glorify the hunter.” So, in the jungle of presidential Nigeria, who is (or should be) the lion and who the hunter? Should a lion really be ever heard wringing his hands in embarrassing cowering and flinching before any beast of the jungle?

And it wasn’t that he became president as a political orphan. Even he, despite the cold lamentations and self-victimization, remembered he once had the entire nation as wind behind his sail. “The pressure to preclude me from contesting in 2011 met with solid indignation from majority of Nigerians,” he wrote. So, when and how did Jonathan lose it to the extent that he would lament suffering what he described as “nationwide disdain” in the larger part of his presidency? What happened? I thought he would ask and seek answers to that question in his Transition Hours. But no. He didn’t

Dr Jonathan wrote that he suffered and was ridiculed because he “was not a product of the power blocs that have held sway over Nigeria since 1966.” I find that claim quite interesting and I ask: How did he become the vice president? And when his boss, President Umaru Yar’Adua, became incapacitated and “the cabal” benched him (Jonathan), how did the ‘Doctrine of Necessity’ suddenly come to his rescue? Who was the Senate President that presided over his bailout then? Why did all the principalities who enthroned him in 2011 band together again to stop him just four years later? Who did he offend so much that he was steadily and richly fed with a rich colada of “nationwide disdain?” Did he, when he was looking for power, pledge to the North that he would not contest the 2015 elections? The North said he did. And didn’t he know that there are always consequences for cancellation of agreements in politics? The former leader did not address this central issue in that book. But he remembered what he called betrayals from the North.

Jonathan blamed so strongly, for his loss, Nigeria’s politics of geography and ethnicity. But how fairly did he treat the Yoruba of Western Nigeria who ‘pacified’ the far North to back off the 2011 contest? Can our former president remember that even rebellious Lagos voted him and his PDP in the 2011 presidential election? Can he remember the subsequent cries of marginalization of the Yoruba nation which rent the air throughout his years in power? Can he remember that on 26 August, 2011, less than three months after his second swearing-in, he met the Yoruba Council of Elders led by General Adeyinka Adebayo? The delegation complained about the Yoruba being left out in the top six posts in the country. And Dr Jonathan did not agree with them and he told them so: “You will agree with me that the appointments we have made so far did not exclude any section.”
They heard him and left.

Twice in 2012, the Afenifere took up the fight, met and pleaded with Jonathan: “Check from number one, which is the President, to number 15, you won’t find a Yoruba person there. Look at the people controlling the economy, the finance minister, the Central Bank Governor, no Yoruba person is there. The first lawyers in this country were Yoruba. Today, Yoruba are marginalised in the judiciary. In the National Assembly – the Senate and the House of Representatives – Yoruba people are not in leadership position. It is bad. It’s as if Yoruba are not wanted.” On January 2, 2015, Afenifere Renewal Group issued a statement that presaged what happened to Jonathan in the election of that year: “Nigerians should be concerned because the 2015 general elections will not replenish the country’s depleted tank of political stability if certain reforms are not pursued as urgently as possible….In the absence of socio-political and economic justice, nepotism and ethnocentrism have taken over as the emblem of our presidential politics. For instance, it is difficult not to read meaning to the fact that under the current administration, all economic agencies like the Central Bank of Nigeria, Security and Exchange Commission, Debt Management Office, and Finance Ministry, are headed by experts from one ethnic nationality.”

The North wanted power and was loud about it. The West wanted justice and warned but Jonathan did not read them. And these people were his bulwark in times of trouble! Can he remember that, at a point, all complaints about the injustice of his regime stopped even as he ignored his former allies? That was the “port of no return.” And at that port, no recalcitrant friend hears again the receding footsteps of the Yoruba. It will happen again. Yesterday it was the economy sector that was colonized by Jonathan’s trusted tribe; today it is the security sector that is the exclusive colony of Muhammadu Buhari’s trusted northern experts. Like Jonathan, the old man from Daura insists he has been fair to all. And, in any case, he argues, his choices are untainted in proficiency and cleanliness. But rude Boko Haram is prying open the nation’s tank of blood, fraud, tears and failure. And it is sad. And we will soon know if the arrogant imbalance of today does not sound exactly like the addled head of yesterday. We will soon read the next lamentation and then tell the next inheritor of the widow of Nigeria to learn and change or else the wheel of regrets will continue its gnashing cycle.

My Road Accident: A Letter of Gratitude to You!